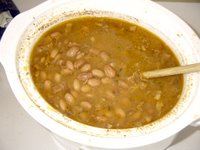 I think they should change the name to the Hotter 'n Hell Cook-off. It was really hot. I mean like 108. My results were disappointing overall. I did manage to get a 4th place in the jackpot beans which it my highest finish in that category. My brisket made it to the finals table but didn't place. My chicken fell apart and looked horible. No style points there. Not sure what happened with the ribs. I thought they were pretty good. So I missed my last chance to qualify for Meridian. Not sure that's a bad thing given the temperature will remain in the 100's. Better luck next year.

Well there were a number of brave souls that decided to endure the heat and cook at the Hamilton cook-off. Triple digit temperatures and hot fire boxes will really zap your energy. My success this weekend was mixed. I didn't do as well in my meat categories as I had hoped but I did have some new success in a couple of non-meat categories. This was only my second entry into the jackpot pinto bean category and I managed a seventh place finish. No money but a good effort. 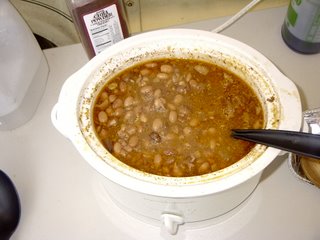 Hopefully this will a good foundation upon which to improve. They were pretty tasty, and nothing fancy. Just good old pinto beans. Personally, I think they got a little too soft so I'll adjust the cooking time in my next effort.

The next entry was chicken. I had high hopes for my chicken this time. After all, I had made a new ceramic cooker just for the birds. Well I might not be a Big Green Egg, but I found out it my invention was still fragile like an egg. I pulled into the cook-off site to find the lower half of the cooker in about twenty pieces. Not a good start. 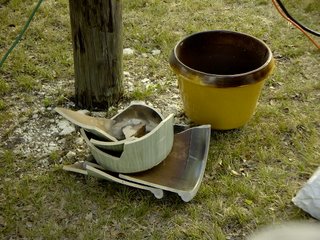 So the chicken went on the pit a usual and I really was not pleased with the outcome. It tasted great but not the way I wanted it. So I'll be going back to the garden shop for another planter. Next time I'll make sure that it is cushioned enough for the ride. The chicken entry made the finals table but no ribbon. 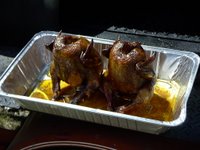 Next entry was pork spare ribs. I cooked them the same as I always do and got about the same result. A very decent product but not a winner. I got a 10th place ribbon. Not good enough for any money and not a qualifier for the Meridian cook-off. 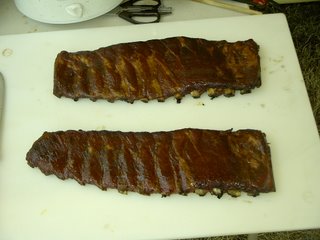 The next meat entry was brisket. After reading some posts on a popular BBQ forum I decided to cook the brisket a little different this time. They say don't experiment at cook-offs but this was a definite experiment. The point of the experiment was to cook the meat faster and finish earlier so I could get some sleep and not be so wiped out the next day (or two or three). I kept the pit at about 325 to 350 degrees. The briskets were wrapped at 165 degrees and cooked until about 195 degrees. They finished in about four hours. I put them in a cooler and held then until turn-in time. The donation brisket was still hot a full 10 hours later. I did place the my entry back on the pit for an hour or so before slicing. It was still very warm though an incredible 15 hours later. I was very encouraged by the result. No ribbon but it made the finals table. The taste is very different that a brisket smoked for 15 or so hours. 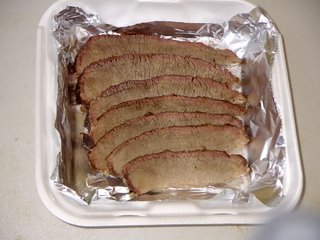 Much less smoke taste so I will need to adjust the seasoning in the rub a bit for the next try. Definitely needed some additional salt. The product looked good in the entry tray so I think this is another good foundation upon which I can build. The six hours of sleep I got was a great improvement. The picture makes it look dry but it actually was quite moist. That's always a good starting point for brisket.

The highlight of the cook-off was a new category for me, dutch oven desserts. Since I have a good dutch oven on my rig I decided to give it a try. I researched recipes and decided to do something a little different than the usual dump cake cobbler. Fried fruit pies was to be my entry. Apricot-nectarine fried pies to be exact. Well there is such a thing as beginners luck. Although there were only six entries, I managed a First place finish! My very first cook-off trophy and finish in the money. An would you believe it, I didn't take a picture of the product.

The folks a Hamilton were very nice and put on a very nice event. I'll be back next year and I hope others will consider making the trip. It's hot and gas prices are high, but they put on a first class event and I have nothing negative to say about it.