No cookoffs lately. I'm trying to go to two in August in hopes of qualifying for Meridian. I've been doing pretty well in the chicken category but never seem to get over the hump. 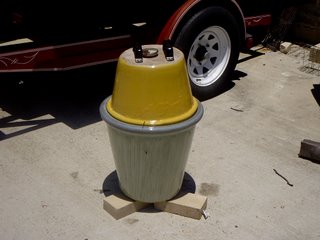 Well I might have made progress this weekend. In an effort to make a juicier chicken, I thought I should try a ceramic cooker. Well, BGE's and Kamados are expensive, so I decided to make one. So here it is, The un-egg ceramic cooker.

I know, not a beauty queen, but it really worked. These ceramic pots were very heavy and held the heat very well. I put a couple of handles on the lid so I could easily lift it off and a good thermometer. 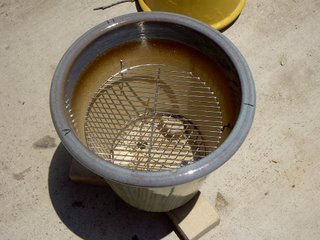 I cooked a whole chicken in about two hours and it was very moist. So you may see the un-Egg at my next cookoff appearance. Don't make too much fun of it.

Went to the cookoff this weekend in Waxahachie. They had a decent turnout, I guess about 18 teams. It was hot but not terribly hot. We were able to snag some free electricity from the pavilion building. Just enough to keep the AC running and the 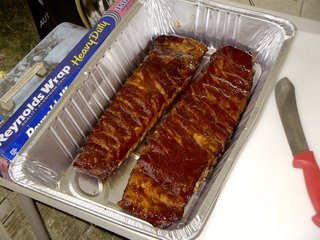 genset not running. I was pleased with my overall performance. I placed 7th in chicken and 8th in ribs. No money but it was my first time to win two ribbons. I guess that's progress. I was very disappointed with my brisket. 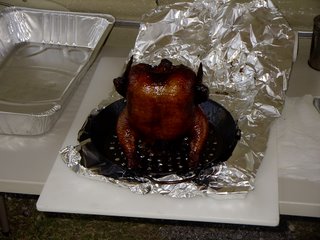 Every single digital thermometer I had failed. The one I thought I had working was giving false readings. I thought my brisket had hit 195 degrees but when i cut it I found it very undercooked and tough. I turned in some edge pieces bit they were not good enough. I'll have an analog thermometer with me for every cookoff from now on. Live and learn.

The Road Up to Now 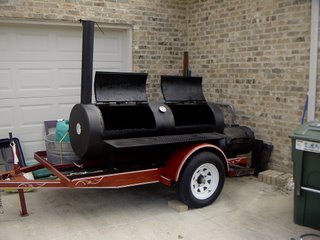 So let me review what got me to this point:

A couple of years ago I bought an inexpensive backyard smoker. It was a vertical type that used propane for the heat source and had a small wood chip box for the smoke. I really had some pretty good results. My family and friends liked the results which got me thinking I would like to get into this a little deeper, maybe go to some cook-offs. I reviewed the rules of various sanctioning organizations and learned that my propane cooker would be illegal. You had to use wood or charcoal for all of the heat. I started looking for a real pit. It took a while for me to find one, some were really expensive. I finally found one near by on eBay at a pretty good price. I actually made a bid at the starting price which was below the reserve price. No one else bid and the pit went unsold. I received an email from the seller with an offer to by at my original bid and I took it. That was in June 2005. 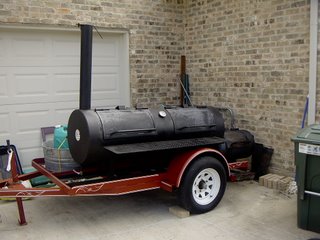 So this is the pit I bought. It was really a steal! I was very lucky to get on for the price I did. It was well seasoned, had good tires and pulled really easy.

My first time to fire it up was for the Fourth of July 2005. We were invited to our neighbors for a swimming party and everyone was going to bring some food. My wife decided I was going to bring ribs. Since I was going to go fire it up anyway i decided to also some a couple of butts (I know, this is Texas and beef rules). The first thing I found out was that tending a fire in July is HOT and a lot of work. I was constantly adjusting the damper to keep the temperature level. The end result though was the butts pulled easily with a nice bark and the baby backs were fantastic! The neighbors gave me a stamp their approval.

Time for a competition.

I joined the The Lone Star Barbeque Society and decided my first cook-off would be in Keller, TX at the end of September. The temperatures would be cooler and I could refine my technique some. It was also very close to home. The cook-off came and I set up under an EZ-Up. Cooked the brisket all night, sleeping a little in the back of my Tahoe, put the ribs on in the morning and the chickens a little later. Everything was done by their respective turn in times. I was tired and proud of my product. The awards ceremony took place and I won...Nothing. Very disappointing but realistically no unexpected. It was, after all, my first try and I was competing against some seasoned veterans of the society.

The next cook-off for me was about a month later in Fairfield, TX for another Lion's Club cook-off. Here I placed for the first time getting 9th in the chicken category. I was very excited to place. I learned though that sleeping in the back of the Tahoe could get a little cold!

Three weeks later I was in Rowlett, TX for the Exchange Club's cook-off. Once again I placed in chicken coming in at 8th. Now I really knew sleeping in the truck in November got very cold!

Well I quickly realized that the weather was going to be a big factor in these competitions unless I could came by some more hospitable quarters. A motor home was a must. It had to be a motor home because I could not pull both a travel trailer and a pit. Now to find one locally at the right price. I looked at many adds and learned that the newer ones were quite expensive but depreciated very fast. No reason to put a lot of cash into something that would not hold any value. I started looking at older models. I wanted something small as I was not traveling with my entire family. They are not exactly the "camping type". Finally I found one that looked promising in Irving, TX. An '85 model class A with pretty low mileage. I checked it out and decided it met my needs. I bought it. I just don't watch the gas indicator too close. At $3.00 a gallon it hurts.

So here's my rig as it stands: 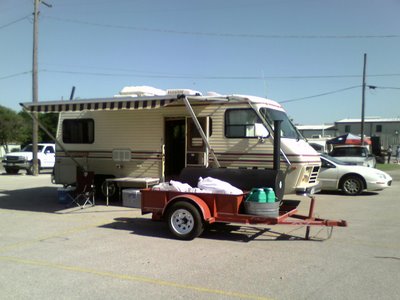 Now let's back up a couple of months. I realized that it was time consuming an tedious to keep a level temperature in the pit. Maybe it was a design problem. Anyway, modifications were in order. One thing I did was to place a layer of fire bricks under the cooking grates. these would hold heat and level out some fluctuation. But what about the air supply? I came across a novel item at THEBBQGURU.com. It was a temperature control devise that monitored the internal temp of the pit and blew air into the fire box as needed to keep the temperature at a set level. It was called The Pit Minder E-temp. I bought it and installed it on my pit. It works great and I can leave the pit for two or three hours without watching it as long as there is enough wood in the fire box.

They also have versions that monitor you meat temperature and cut down the heat when it's done. Pretty cool (Yes I can hear the old timers grumbling).

So back to cooking:

In April '06 I went to the Cowhill Chili & BBQ Cookoff in Commerce, TX. This was a real fun cook-off with a lot of good, live music. I was glad to have the RV because a spring blue northern blew in and it got cold! The wind was like 30 to 40 mph. I was happy to place 10th in ribs here.

In may I went to the Honeyfest BBQ Cookoff in Burleson, TX. The temperature was up and I was glad to have the AC in the motor home. Came in 9th in ribs.

In June I went to the 5th Annual Colleyville BBQ Cookoff in Colleyville, TX. There were 60 teams, the largest cook-off for me so far. I didn't place but made the finals in ribs. I did palce 10th in the chili competition the next day.

My last cook-off was in Dublin, TX, home of the country's oldest Dr. Pepper bottling plant. The cook-off was held in the city park which was down the street from a cattle farm. Where there's cows, there's flies. Lots of flies! I was swatting flies all day. Anyway, there were 44 teams and I placed 8th in chicken and made the finals in brisket. Not too bad.

So up to now, seven cook-offs and five ribbons. It's a start and the quest continues.

What's in a name? 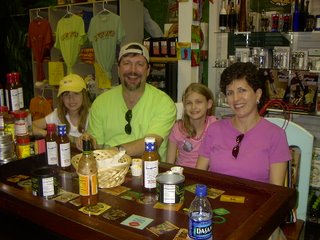 Eye Que? What's that all about? Well obviously it's a play on words. If I had named it "I Que" it would be clearly short for "I Barbeque". By why "Eye Que". Well it happens that i have a full time job as an ophthalmologist. An ophthalmologist is an eye doctor. Since this eye doctor cooks barbeque, I came up with the name "Eye Que". It may be a little corny but it works for me. In case you are wondering, I practice in Bedford, TX and yes I do accept new patients. Here I am with my family: Gloria, my wife, Christine and Caroline my daughters, sitting at the tasting bar of the Peppers of Key West shop in Key West, FL. Bring your water bottle and watch out for that stuff in the fridge! A little dab will kill you!