Leave it to the good folks down in West to put on another great cook-off. This years event, held at the West Knights of Columbus hall, drew 72 teams, including many of IBCA's top cooks. This was also the added money event for the TxBA pit. Sweetening the pot always draws out the good cooks.

This was also the maiden voyage of my new smoker. I managed to get it finished just before the cook-off and was anxious to see how well it performed. 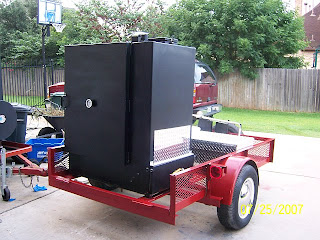 All in all it was a successful cook-off for me for several reasons. First off, the new cooker performed very well. I give it a grade of 90 with points deducted only for the poor performance of the latches I chose for the firebox door. Those will be replaced before the next event. As for cooking, I managed a ninth place finish in chicken and a finals table performance in the rib category. The chicken finish was a miracle because the first chickens I cooked exploded and the skin split into shreds. They looked horrible and I was not going to even attempt to turn them in. As luck would have it, my buddy Tony had some extra chickens in his cooler. He gave me one and I quickly preped it and threw it on the Big Green Egg with only an hour left before turn-in. I cranked the heat up some and it was done just in time. The rest is history. Many thanks to Tony for bailing me out on that one. Tony also did well in chicken with a seventh place finish. Congrats!